NPO Cure Sarcoma’s third ordinary general meeting is to be held as follows:

If you are interested in attending our general meeting, seminar, and over-dinner gathering, please contact us at support10@curesarcoma.jp by February 25.

Central Social Insurance Medical Council, an advisory body for Ministry of Health, Labour and Welfare decided on January 20 to apply particle beam radiotherapy under national insurance coverage to the following patient therapies: ion bean radiotherapy for pediatric cancer and for bone soft tissue tumors in bones and muscles that are difficult to be operated by surgery. A therapy called “blood patch” for headaches caused by losing cerebrospinal fluid after automobile and other accidents is also to get national insurance coverage. Both procedures will begin from April 2016.

Particle beam radiotherapy is a treatment to attack cancer cells by using beams of energetic protons, neutrons, or positive ions for cancer treatment. It used to be assigned as an advance medical care and only the necessary medical examination and hospitalization costs were covered by national insurance. It costs three million yen if patients have to pay by themselves. The monetary burden for the patients will be significantly reduced by this insurance application.

A commemorative symposium of Japan Sarcoma Association is to be held in Kyoto on December 3 and 4.  NPO Cure Sarcoma supports this symposium.

If you would like to participate in this seminar, please send an application by November 16 to jsa@smtrc.org (e-mail) or 06-6981-3000 (fax).  Participants need to be a member of Cure Sarcoma Center with an annual membership fee of 15,000 yen. (Two people can attend the seminar.)

For the details, please see below:

Taiho Pharmaceutical Co., Ltd. announced on September 28 that it received marketing approval from the Ministry of Health, Labour and Welfare for the novel antitumor agent Yondelis (nonproprietary name: trabectedin) 0.25 mg and 1 mg IV Infusion, for the treatment of patients with soft tissue sarcoma in Japan.

Yondelis is an antitumor agent developed by the Spanish company PharmaMar, S.A. It was originally isolated from the Caribbean ascidian Ecteinascidia turbinata and is now produced through semi-synthesis. Taiho Pharmaceutical entered into a license agreement with PharmaMar in 2009 to develop and commercialize the drug in Japan, and has since been engaged in its development.

Cancer awareness raising event Relay For Life is to be held in 48 places around Japan from May to November. So far NPO Cure Sarcoma joined the events in Tsukuba and Hachinohe. The below is the list of RFL’s that we are planning to attend from the end of August.

We are planning to attend relay walks and communicate each other under the team tent. We will be at the team tent with NPO Cure Sarcoma banner most of the time from the opening to the closing.

Please come and join us if you are interested in our activities. 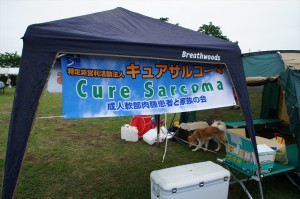 NPO Cure Sarcoma name appeared in the Asahi Newspaper’s “Cancer New Era 74”. This was in the article about rare cancers.(July 29 2015)

NPO Cure Sarcoma participated in the Relay For Life Japan 2015 in Hachinohe (RFL Hachinohe) as a team on June 13 and 14. 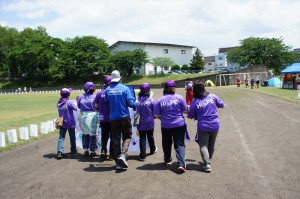 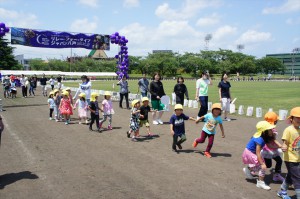 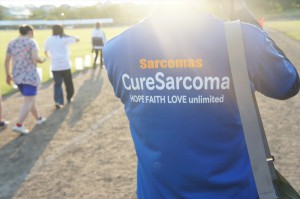 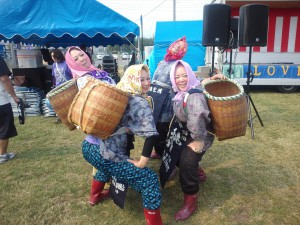 RFL Hachinohe was an event rich in local color with many local students, pupils, and even a costumed mascot character attending. One of the organizing committee members with strong leadership was our fellow sarcoma patient. She was very busy but kept smiling all the time. Thanks to her and other members, the event was full of smiling faces and laughing voices. They arranged our patient member to attend the survivors’ talk on the first night stage. We would like to thank organizing committee members for their hard work.

More than 10 people including sarcoma patients and families from Tohoku and Kanto could communicate by talking under the team tent and walking in the relay during the two days. Members from Kanto forgot to bring NPO Cure Sarcoma flag, but communication with fellow members, good food in Hachinohe, and 3 nearby hot spring visits made them forget the fatigue from 700 kilometer drive. It was windy at the beginning and we worried about the coldness at night and the possible damage to the tent, but the weather became milder. We achieved a record high of 6 people spending all night at the tent, which was a very good experience.

Thank you very much for all involved in RFL Hachinohe. We hope we can meet again at other RFL’s or in Hachiohe next year!

I obtained a scholarship of PAL (Patient Advocacy Leadership) program from Japan Society of Clinical Oncology and attended the 2015 ASCO conference held in Chicago from May 29 to June 2.

Four members (two from last year and two new members including me) were chosen to attend this ASCO. I got rather nervous because there was no explanation in advance on who to attend and how to make a registration. I made the airline and hotel reservation and ASCO web registration by myself. Two members from last year were supposed to look after the new members, but they had to return to Japan after attending only the opening day in order to take part in the Cancer Summit sponsored by Ministry of Health, Labour, and Welfare on June 1. However, we could manage to survive by ourselves and participated in sessions, browsed poster exhibitions, and visited many booths of pharmaceutical companies.  Five days passed by very quickly.

I took off from Haneda and arrived in Chicago after visiting my wife’s grave in Vancouver. It was my second visit to Chicago since I last visited there 25 years ago. Chicago is a very attractive city facing Lake Michigan with old and new buildings in the same area. We can enjoy art galleries and museums in the day time and blues and jazz in the evening.

ASCO is the world largest conference on cancer medical treatment with 38,000  attendance including doctors, researchers, employees from pharmaceutical companies, and so on. Unfortunately there were no participants from US sarcoma patient groups in the PAL program. However, one group called Sarcoma Alliance had a booth exhibition. (There was only one desk with no people, but I could meet one person on the last day.) I would like to start contacting them from now on. PAL lounge was very comfortable with many sofas. Even breakfast and light lunch were prepared in addition to drinks and snacks. I had purchased lunch tickets in advance via online, but those were not necessary at all.

In the morning of the first day, I attended the meeting of SARC（Sarcoma Alliance for Research through Collaboration）held in a midtown hotel. I met Dr. Robert Maki and Dr. Robin Jones I had met in Japan before.   At this year’s ASCO, there was a presentation on immunotherapy at a symposium in a big conference hall.  Immunotherapy has not received much positive attention because it was considered to be suspicious. As for sarcoma, the sarcoma education session had only a few attendees, but poster sessions and oral presentation sessions on clinical trial results were heated up. Poster sessions in the morning on May 31 had 70 posters on sarcoma. Dr. Nishida and Dr. Narahara put their posters there. In addition, June 1 evening oral presentation session on sarcoma was full with an audience of 300, and the two rooms were hurriedly added for a simultaneous broadcasting. I understood why it is said that the use of anticancer drug including molecular target drug is decided at ASCO.

At medical conferences in Japan, patients cannot visit pharmaceutical company booths due to the Pharmaceutical Affairs Law restrictions. However, anyone could visit them and ask questions at ASCO.

Two main purposes of my visit this time were to obtain useful information on sarcoma clinical trials and to communicate with US sarcoma patients. Unfortunately I did not have many chances to talk with sarcoma patients.

The below are the brief summary reports of oral sarcoma presentation sessions on June 1.

1) Gemcitabine + Docetaxel phase III clinical trial As a result of comparison with doxorubicin, there was no special superiority in the initial treatment of progressive soft tissue sarcoma on the 24 week no progression rate. Doxorubicin had a better result on heartbeat rates. Among male patients, doxorubicin had some better results.

2) Olaratumub (IMC-3G3、PDGFRα antibody, Eli Lilly) The test was done in the phase b/II clinical trial of doxorubicin alone and using it together with olaratumab toward 130 progressive soft tissue sarcoma patients. It was reported that the duration of life had been extended by 10.3 months using olaratumab with doxorubicin. It is planned to move on to a phase III clinical trial.

3) Eribulin (309 trial, Halaven, Eizai Co., Ltd.) Eribulin had a good performance in the phase III clinical trial against breast cancer patients. This time, a phase III trial to compare eribulin with dacarbazine (Kyowa Kirin) was conducted against 594 progressive leiomyosarcoma and liposarcoma (ADI) patients. It was reported that eribulin had better OS of 13.5 months, compared with dacarbazine’s 11.5 months. As a result of this data, Eisai plans to extend this drug’s application process in Japan, US and Europe in the early half of 2015. This is going to be the second application after breast cancer.

5) Regorafenib phase II clinical trial (Bayer) Double blind test (ad hoc patient selection and use of placebo drug) was conducted against leiomyosarcoma and other soft tissue sarcoma patients. As a result, there were improvements in PFS (3.7 months v.s. 1.0 month) and OS (in the case of leiomyosarcoma). Toxicity was predictable and acceptable. Final analysis is to be completed by the end of 2015.

This is a quick report of my ASCO visit. Thank you very much.